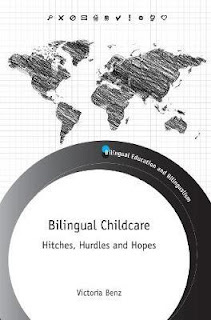 I just finished the book "Bilingual Childcare – Hitches, Hurdles and Hopes" by Victoria Benz. I must say that I really enjoyed it. It is a fascinating in-depth study, an ethnographic study, of an early childhood dual language programme in Australia. The book is full of information, complemented with people's points of view when the author quotes the parents she met and interviewed. Victoria Benz has been investigating a German-English childcare centre in Sydney, Australia. She tells us about what she discovered and surprised her most. After exploring at the manner, it was established and implemented, she examines what is happening. She first looked at how the carers or teachers as they are often called are managing the two languages, German and English in the everyday routine of the children. Which language is more predominant and why? She spent time looking at the attitudes of the educators as well as their ideologies and practices, asking them why they were acting in such a manner. She discovered a number of facts which are quite surprising and explain why there is such an asymmetry between these two languages. She then queried their training and backgrounds as bilingual carers or teachers and discovered there are a number of discrepancies in the Australian system.
She also took time to survey the parents who sent their children to the centre she chose to call Fritzkids. Why did they choose that centre? Is it because of the languages or for any other reasons? She also looked at their attitudes, ideologies and practices outside the day care. Their answers are sometime quite surprising and I myself, as a bilingual language advisor, was quite surprised. The background of the parents is also reviewed as well as what they intend to do with the German their children had acquired. What is the value that parents are giving to the bilingual education and to the languages in this case. There is a kind of complex relationship between the childcare provider and the clientele which helps to understand what is really. The external constraints seem to be against the success of bilingual education and would have an influence on the language policy at family, institutional and state levels.
Victoria Benz concludes with a look at the future of bilingual education for young children. The attitude of the parents, the training of the teachers, the country language policy, the family language policy, all of these elements will influence the development of any bilingual childcare.
Although Victoria Benz has been studying on specific childcare in Australia, I feel that her findings could be applied to many other bilingual childcares and that anybody wishing to run such a childcare should be reading this book and see how they can improve what they are doing, what they are offering, how they are offering it. It gives light on language ideology vs the practicalities of life. This book would also be of great interest to teachers who are training and looking at bilingual education. It is well researched and gives a new perspective on bilingual education in monolingual society.